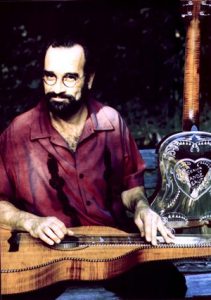 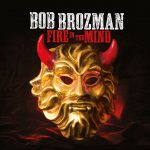 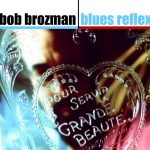 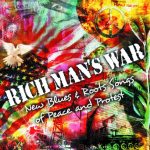 Bob's familiarity with diverse world music cultures produces a novel blending of rhythmic and timbral influences, unparalleled in today's musical environment. His rhythmic dexterity resonates with elements of blues, jazz, Gypsy swing, calypso, sega, and even the most modern hip-hop and ska beats.

Likewise, his chords and harmonies articulate an acute blend of timbres from Hawaiian, Indian, African, Japanese/Okinawan, Caribbean, and American roots blues. His fingerwork has been described in world press as uniquely staggering, yet full of humor. Bob has a collection of hand-tricks that make audiences look for electronic effects that in fact don't exist: his show is the clean product of acoustic genius.

Bob's disarming talent for humor and rapport invariably adds spice to his already well-seasoned repertoire of music. A lifelong study of ethnomusicology and the global migration of musical styles ensures Bob's committed attention and respect to each of the cultures in his repertoire. He casually shares historical facts with his audiences, and charms them with his ability to integrate local languages into his show: over the years, Bob has taught himself useful phrases in over 30 languages, which he regularly uses both on stage and off.

Undoubtedly, however, Bob's preferred language is music - which he speaks fluently, around the world. His most recent projects have rendered him a true player in the world music scene. In the past year alone, he collaborated on stage and in the studio with over four dozen artists from more than 13 different countries. At the 1999 Festival d'Été in Quebec, for example, Bob assembled an international troupe that included Debashish & Subhashis Bhattacharya (India), Takashi Hirayasu (Okinawa), Rene Lacaille (La Réunion), Djeli Moussa Diawara (Guinea), George Pilali (Greece), Romane (French Gypsy guitarist), La Familia Valera (Cuba), and George Gao (China) - all performing for the first time together, live on-stage! Since that time, Bob has brought parts of this vast ensemble to the USA, Europe, and South Africa.

In the years since 2000, Bob has completed fourteen full-length recordings with many of these individuals: most notably, the 2003 release of MAHIMA with Debashish Bhattacharya, the 2002 release DIGDIG with Rene Lacaille, as well as JIN JIN (with Hirayasu); OCEAN BLUES (with Diawara), IN THE SADDLE (with Led Kaapana); NANKURU NAISA (with Hirayasu), TONE POEMS III (with David Grisman); SUNRISE (with Bhattacharya); ROLLING THROUGH THIS WORLD (with Jeff Lang, Australia); GET TOGETHER (with Woody Mann); and FOUR HANDS SWEET & HOT (with Cyril Pahinui). In addition, Bob has released four solo projects: LIVE NOW; METRIC TIME; BLUES REFLEX; and the latest POST-INDUSTRIAL BLUES. In 2003 and 2004, Bob journeyed twice to Papua New Guinea, to record and be filmed with five string bands (60 musicians) for international release in 2005.

On POST-INDUSTRIAL BLUES, as Bob breaks from the collaborative genre, he brings this same spontaneity with him to the studio. Bob's impromptu recording style breeds a freedom that informs not just the structure of a song, but the timbral landscape as well. Many of the instruments that give POST-INDUSTRIAL BLUES its signature "Brozman" sound, were added in a spirit of sheer experimentation.

On POST-INDUSTRIAL BLUES, Bob returns to his blues and Americana roots for a musically brave and honest look at a world in change. With several new socio-political songs, plus emotional reditions of some Delta blues, POST-INDUSTRIAL BLUES is a perfectly timed soundtrack for today's changing world. It is proof that Bob continues to challenge himself artistically, taking risks and evolving in the manner of the great blues pioneers that have come before him.