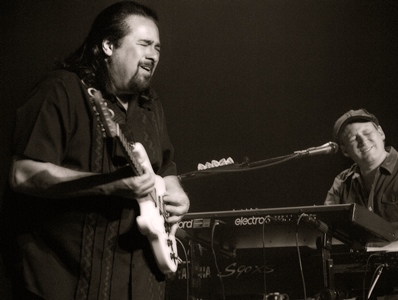 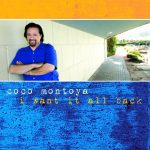 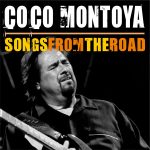 Over the course of his 30-year career, guitarist and vocalist Coco Montoya’s explosive guitar playing and soul-driven voice have propelled him to the upper reaches of the blues-rock world. From his early days as a drummer to his current status as one of the top-drawing guitarists and vocalists on the blues-rock scene, Montoya has forged his reputation through years of hard work and constant touring. And it all started with a chance meeting in the mid-1970s with legendary bluesman Albert Collins, who offered Montoya a gig as his drummer. Albert took an immediate liking to Montoya, becoming his mentor and teaching his new protégé secrets of the Collins “icy hot” style of blues guitar. Five years later, John Mayall happened to catch Montoya at a jam session and was blown away. This led to Montoya’s touring the world for ten years with the legendary Bluesbreakers. Since stepping out as a bandleader in 1993, Montoya has released four solo albums and has performed non-stop at clubs, concert halls and major festivals all over the world. At every show, fans’ jaws dropped, and critics raved about Montoya’s mind-bending guitar licks and impassioned vocals. “The fiery blues that issue forth from Coco Montoya’s guitar are awe-inspiring and boogie requiring,” shouted The Village Voice. “Blistering, pure blues,” cheered Blues Revue.

Born October 2, 1951, Coco grew up in Southern California during the late 1950's and early 1960's, Montoya was immersed in music at an early age. Whether it was his father's big band records or his older brothers and sisters rock and roll records or the early rock and roll and doo wap that flooded AM radio, Coco took it all in with open ears. At the same time, English musicians like John Mayall and Eric Clapton were developing blues styles. "When I first heard Eric Clapton doing "Hideaway," was my re-education into the blues."
As a teen, Montoya discovered the guitar as a way to voice the inner feelings that needed expression. "I remember being young and having a hard time expressing myself. When I found the guitar, I found the way to express my heart." But it was as a drummer in local rock bands that first put Coco on stage.
Then seeing Albert King showed the youth how to play the blues. "I went to see Iron Butterfly and Creedence Clearwater and a guy named Albert King was playing in between them. He picked up his guitar, did "Watermelon Man," and changed my whole life. That was the first time I heard music that came from the heart."
Montoya is a self taught guitar slinger who plays with an emotional intensity few string benders possess. Playing left-handed and up side down like Albert King, Montoya learned his guitar techniques from his years with Collins. "I never had a lesson in my life. "I would watch other guitar players to catch what they did. I would wait for that one moment when they would do it, and just stare at them and try and remember where their hand was, where their fingers were.
"People ask, 'Did you take lessons from Albert?' It's more from just hanging out in the hotel rooms. He would grab his guitar and I would pick up one and we'd play I just learned by listening, all by ear. I just play it the way I hear it. He was always saying, 'Don't think about it, just feel it.' He taught me to tap into an inner strength. I don't know all the licks in the world, but I know the ones I can express happiness or sadness or emotion."
From 1976 until 1984, Montoya had lost some of the feel for music and worked bartender jobs to survive. In 1984, his second mentor, John Mayall, was celebrating his birthday in a bar where Montoya was performing. Montoya's from the hip version of "All Your Love" caught Mayall's ear and Coco was asked to pack his Strat and follow previous Bluesbreaker guitarists Eric Clapton, Peter Green and Mick Taylor in the Bluesbreakers. "I would never be doing what I'm doing now if I hadn't gotten the phone call from John Mayall."
After three records with Mayall as a member of the Bluesbreakers, Coco decided in 1993 it was time to take the lessons from his two musical fathers and begin to sculpt a solo career. In the early 1990's he was signed to Blind Pig Records and released three critically acclaimed discs, Gotta Mind To Travel, Ya Think I'd Know Better, and Just Let Go.
In the middle of his Blind Pig days, Coco also received national recognition when he was named the Blues Foundation's Best New Blue Artist at the 1996 Blues Music Awards.
In 2000, Coco took his music up a notch and signed with Alligator Records, the country's top blues label. In his seven years with Alligator, Coco released three more outstanding records, Suspicion, Can't Look Back, and 2007's Dirty Deal.
Today, in 2009, Coco Montoya has found a new home in the old world. Europe's premier blues label, Ruf Records, signed the guitar giant and is poised to bring Coco Montoya's heart to a world audience. I Want It All Back is the first step in that commitment. Now, in 2014, he releases his first live CD set Songs From The Roads.