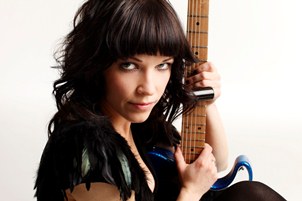 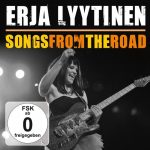 No doubt about it: Erja Lyytinen has the talent and looks to put Finland on the international blues map. Born into a musical family in the small town of Kuopio, she integrates jazz, folk and even pop elements into her bluesy mix. Lyytinen’s outstanding slide guitar playing has earned her the nickname “the Bonnie Raitt of Finland” and led to festival appearances alongside Koko Taylor, Marcia Ball and Bonnie Raitt herself. Now, this impressive young lady is poised to break out to an even bigger audience.

In the past few years, Erja Lyytinen has taken the international music scene by storm. She's a young, talented singer/songwriter and exceptional guitarist who plays everything from dobro to slide guitar. "But the guitar - or any instrument for that matter - is there just to support the story that I'm always trying to tell with a song", she says.

Erja was born to a musical family in Kuopio, a little town in the middle of Finland. At the age of 15 she was performing with her parents - singing and at first playing the violin and later the electric guitar. "People always wonder how a girl picked up the guitar. But being from a musical family - my mother is a bassist and my father a guitarist - I don't think that's a far stretch," Erja laughs.

Erja's second album Wildflower (Bluelight Records), which she also co-produced, was officially released in June 2003 at one of Finland's biggest festivals, Puistoblues. "It was great," Erja enthuses. "We got to open for Koko Taylor and Bonnie Raitt. They've both had a huge influence on me." Erja has often been compared to Raitt and the Finnish magazine Blues News once hailed her as the Bonnie Raitt of Finland.
"I think the main reason why some people compare me to Bonnie is that we both are women and play slide guitar. But naturally, it was fantastic when I finally got the chance to meet her. She turned out to be a really nice person."

In 2005, Erja signed with Ruf Records and promptly flew to the USA to collaborate on a project with British blues artists Ian Parker and Aynsley Lister. The resulting album, Pilgrimage, was a huge success and led to subsequent tours in the United States and Europe as well as the live DVD Blues Caravan 2006 - The New Generation. One of the songs Lyytinen wrote for the Pilgrimage session, "Dreamland Blues," also appeared on the CD Blues Guitar Women compiled by award-winning Canadian blues artist Sue Foley.

Erja returned to the U.S. in 2006 to record her first solo album for Ruf Records, Dreamland Blues. Teaming her up with David and Kinney Kimbrough (sons of the late Junior Kimbrough, a Mississippi hill country legend) and long-time musical partner Davide Floreno, Lyytinen's latest CD digs even deeper into the gritty blues sound she has now identified as her own. She still integrates a range of other influences such as jazz, pop, R&B and country into her songs. But as Ian Parker puts it: "Erja has now discovered her true musical home - the blues."

After hearing Lyytinen on her first tour of Germany, one critic wrote: "Not only does the lady have a fantastic voice ... she is also an excellent guitar player. Hot sounds from the great white north!" As she continues to pound the road in the years ahead - burning up the fretboard with her slide, flashing that million-dollar smile - Erja Lyytinen is sure to keep winning over the hearts of fans everywhere.