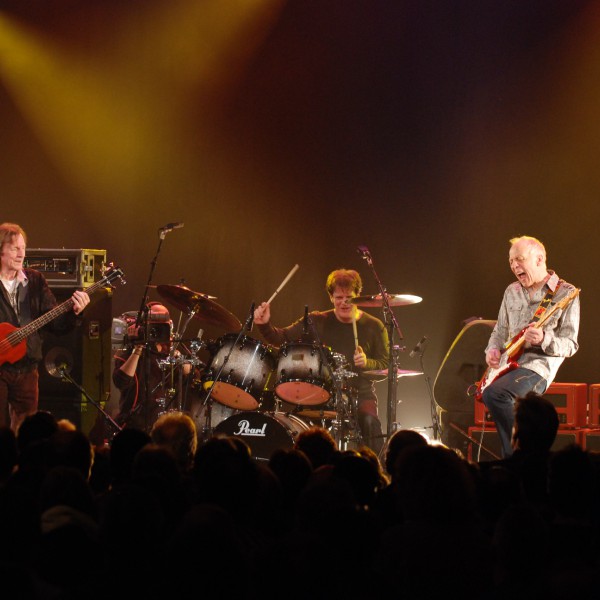 Jack Bruce and Robin Trower for the first time performing live! The news spread like wildfire, the sensation was perfect.
The legendary Cream bassist and singer, all his life striking new paths in blues and jazzrock, and the immense talented guitarist of Procol Harum fame who left the chains of 5-minute-pop behind him very early and who never followed any mainstream cliches: Both musicians have written history in rock for more than 40 years.
It was at the beginning of the 80s when they first worked together in a studio with two remarkable records resulting (B.L.T. 1981 and Truce 1982), but the fans had to wait for another meeting of the titans 27 long years: It was not until last year when “Seven Moons” came out.

The Veterans had formed a power trio; together with the a few years younger drummer Gary Husband (Level 42, Gary Moore, John McLaughlin), they recorded exclusively own material. Trower had come up with some basic ideas and Bruce and he worked them out: Fine bluesrock painted in psychedelic colours und wonderful sounds - a record transporting the living spirit of the creative seventies in to the third millennium. "Seven Moons" is the third joint venture of two aged musicians - and it is their masterpiece.

A few months later a fansite announced: "Bruce, Trower & Husband to take ´Seven Moons´ into orbit! For a few nights only, Robin and Jack will get to play live together for the first time ever in late February 2009."

As a matter of fact: After only two gigs - Karlsruhe and Cologne - the trio was ready to play the dutch town Nijmegen, where the concert would be filmed by a big camera crew. Fans from France, England, Germany and elsewhere arrived in order to enjoy the event together with the dutch devotees of the band.
Somebody placed a notice in the fanblog: With cameras filming the event it might be guaranteed that Bruce, Trower and Husband would play a good concert. Well, this night had something really special, but not because of the camera crew and their equipment. It was only the third joint venture show of the trio, but these guys had found out something meanwhile: They belonged together. They formed a unity. Moments like these bring joy, joy of playing (musicians and footballers know that for sure). You don´t need cameras then.Let´s take a look into the concert.

It´s 8:45 pm. The historic night at the mighty and majestic Concertgebouw De Vereeniging begins on the tick. Jack Bruce, 65 meantime, greets the audience with a short "Good evening" and the band jumps off with the title track of "Seven Moons". Four minutes later the first solo from Robin´s axe, who ist just a little younger than Jack. Both have become lined with age, but it seems as if they will never make old bones. Bruce´s delight about the fascinating little solo is written in his face; Trower notices that he´s doing more than a good job and is all smiles. Solo finished, rhythm change and the trio sets off for the next song, the bluesy "Lives Of Clay". Some time later Bruce makes a little comment with understatement: "Now we are beginning to get somewhere."
They are going to play nearly the whole "Seven Moons" album, they will present a wonderful and easy going version of "Carmen", a song from ways back, off the "B.L.T." album, not as glassy as in 1981 but soulful, very deep. And you bet, there are the signature tunes from Bruce´s famous catalogue. "Sunshine Of Your Love", the song with the legendary bass riff. Here Trower stays true to his own way of playing, no way a Clapton copy but a confident collector of melodies working on his WahWAh without any gimmickry at all. And this version of "White Room" with the "white Hendrix", as they call Robin in the U.S.A., hasn´t ist been remade into something secial here? The bonus "Politician" shows his full artistry during a great solo.
It´s not only striking in what a laid-back way the trio work the themes of this evening, considering that Nijmegen is only the third live show they have staged together so far. To share the joy the musicians show while performing makes this DVD a document of classic, everlasting rock music. Having Jack Bruce on stage again after some heavy blows of fate is particularly heart warming, the more so as he is laughing away at things. What does the scot tell who´s ever so economical in his choice of words? "It is fantastic to be here. For me personally ist is fantastic to be anywhere, actually..." It feels good to have musicians of that kind among us. 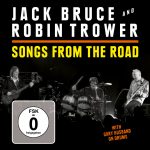 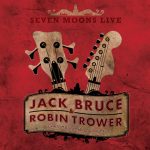