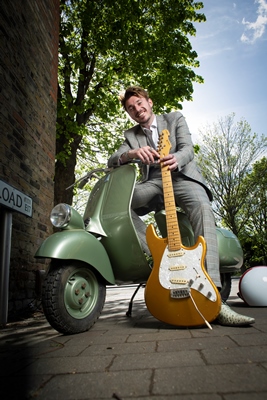 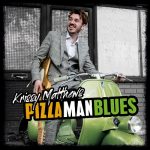 What do you do when your world disappears overnight? By spring 2020, at the grand old age of 28, Krissy Matthews had been a full-time professional musician for more than half his life. Since walking out of the school gates at 16, the British-Norwegian bandleader had measured his existence in albums, tours and broken guitar strings, his thousand-plus shows across the world testament to his insatiable drive, his reputation summed up by the words of Howlin’ Wolf’s fabled sideman, Hubert Sumlin: “Oh boy, this kid can play…”

Released on Ruf Records in 2021, Pizza Man Blues is a snapshot of the moment those certainties were snatched away, with songs that tell of watching the life you knew torn down, then building it back and seeing things clearer as a result. “This last year, we’ve all had to adapt to circumstances,” reflects Matthews. “I’ve been forced off the road, but I’ve tried to keep the engine alive, keep earning, not lose my passion. I’ve done so many jobs, like pizza and flower delivery driver, tree surgeon assistant, volunteering for the NHS. These songs are all about the experiences I’ve had.”

Ask Matthews for an anecdote from his early career and he’ll spin better war stories than a Sixties blues boomer. Born in 1992, he still recalls the time when, aged three, he was called up to perform Roy Orbison’s Oh, Pretty Woman with his dad’s band. A sharper memory still is his coming-of-age at Notodden Blues Festival, when John Mayall invited the 12-year-old gunslinger to guest on All Your Love. Then there were the times he cut heads with Jeff Healey, took advice from B.B. King, pushed tour headliners Robben Ford and Walter Trout to the wire: all highlights of a full-pelt ascent that saw Classic Rock salute an artist who “writes, sings and plays like a man possessed”.

A lifetime later, the Blues Boy of Matthews’ 2006 debut album has been around the block, and the experiences he now recounts on Pizza Man Blues are written from a place of hard-won maturity. Running with the partnership that began with 2015’s Scenes From A Moving Window, and deepened with 2019’s Monster In Me, this latest record sees him writing alongside the iconic Pete Brown. “For a while, Krissy has been one of the most promising artists on the blues-rock scene,” says the Cream lyricist. “But he’s grown more caring, intense and exploratory in recent years, leading to a impressive maturity in his playing, production and writing. I believe Krissy Matthews has now arrived.”

The songs he laid down at Buckingham’s Echo Studios last September are cut directly from the younger musician’s life and blur genres from rock, soul and blues to country, folk and indie. “I wanted a ‘Krissy Matthews’ vibe to this album,” he shrugs. “I don’t like to box myself into restrictions of where I can and can’t go, so I just write and see what happens. This was the result.”

As a statement of intent, the opening charge of Mayday would make Motörhead’s Lemmy nod approval, serving up a feral fuzz lick and a speaker-ratting chorus that asks the big questions. “It’s a kind of letter from Mother Nature to Planet Earth,” explains Matthews, “asking us to make a change.”

With its irresistible ‘uh-oh’ vocal hook and sombre funk verse, The Man Said No echoes the beat of Matthews’ shoes as he pounded the pavement in search of employment – then lifts off with a brassy soul chorus capturing the bandleader’s unbreakable spirit. “That’s about me going round all the supermarkets here in Bicester asking for a job, and they all rejected me.”

The bruised organ lines of Can’t Keep Us Apart paint the gulf between Matthews and his partner as they endured lockdown in different countries, while at the other extreme, Anti-Social Media has a thrillingly torn-up guitar tone and a brass lick the Stax house band would gladly claim. “That’s about the dangers of social media and how horrible it is sometimes,” he explains.

Built on a gale-force soul vocal and a groove that moves like a car chase, Hairdryin’ Drummer Man salutes Hansi Wallbaum: the late sticksman for the Hamburg Blues Band, of which Matthews has been a member since 2015. And with its handclaps, gang chant and robot-sounding guitar, the title track tackles the guitarist’s lockdown travails with good humour. “I wrote about the time I was sent to the army barracks and greeted by guards with big guns,” he laughs. “I had to let them know my pizzas weren’t explosives!”

Defying genre categorisation, Matthews then changes the pace with Ride, its gorgeous, crystalline intro breaking into a giant Zeppelin-worthy lick. Written by bassist Joshua Rigal, the finger-twist lick of Carry You would likewise be proudly claimed by any of classic rock’s guitar gods, while Matthews sings the cascading harmony chorus with true feeling. “My best friend’s mother was diagnosed with motor neurone disease and has rapidly deteriorated,” he says. “So those lyrics really hit home.”

Finally, Grateful is a song so good that Matthews gives us two versions: a country-rock stunner and an unplugged take with a whimsical clarinet solo from Felix Peikli and powerhouse guest vocals from Canadian sensation Layla Zoe. ‘You’ve got to be grateful for what you’ve got,’ runs the indelible chorus. ‘Even if it ain’t a whole lot…’

As the final notes of Grateful fade – and Matthews’ finest album to date plays out – it’s that same sentiment that resonates. “Being a professional world touring musician, in a pandemic, with a girlfriend in another country, during Brexit, is not ideal,” he considers. “But I’ve still found lots of things to be grateful for and I’m a very lucky man. The only way to get through hard times is to focus on the good times…”